Peshawar, the capital of northwest Frontier Province, is our kick-off point for the trip. From here we travel overland, over 3,200 meters Lowari Pass. We visit the Kafir Kalash, a tribe living in isolated Hindokush who trace their origin to the lost warriors of Alexander The Great. Experience the Game of Kings being played at the highest polo ground in the world, a festival that is best attended in the whole of North Pakistan. From here we start our 5 days trek through the rocky Hindokush landscape, over the 4,750m Kachikani Pass to descend in lake-filled alpine green wonders of Upper Swat. 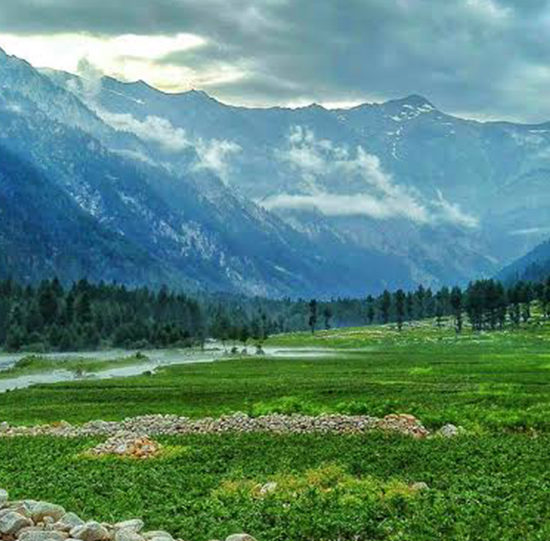 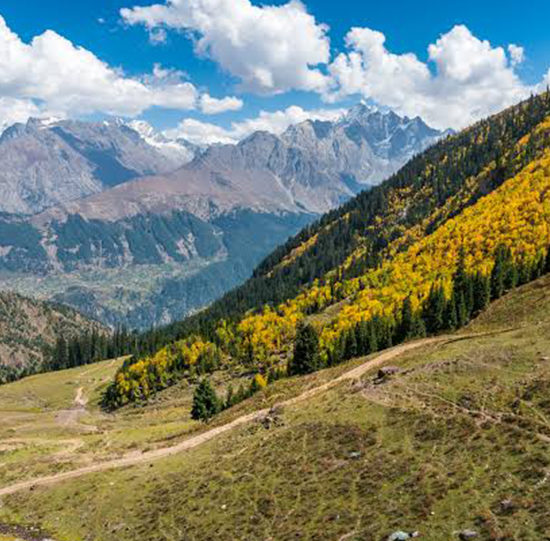 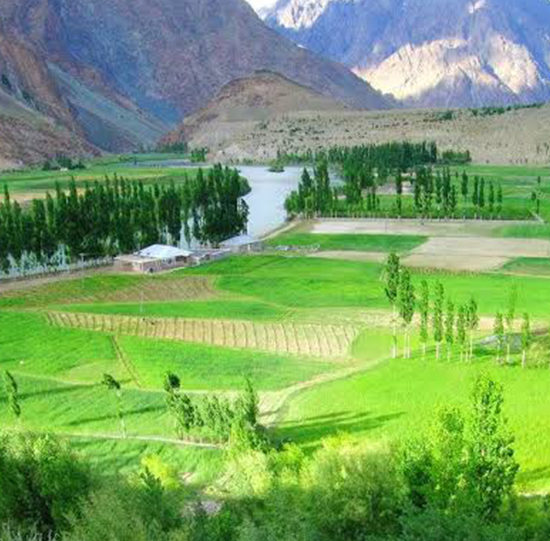 Peshawar   Arrive at Islamabad airport in the morning, transfer by an air-conditioned coach to Peshawar. At Peshawar we will check in at the hotel. Afternoon city tour: stroll down the bazaar of story tellers (Kissa-Khawani Bazaar), visit the historic Mahabat Khan Mosque and the traditional Caravan Serai next to it. Time permitting, visit the splendid collection of Gandhara Buddhist sculpture at Peshawar Museum. Overnight stay at hotel.
3

Chitral   Breakfast at hotel, proceed for the fabled valley of Chitral by road. Passing through the lush green plains of Peshawar, we ascend the Malakand Pass that brings us to the Swat valley. We drive shortly through the Swat valley to arrive at the village of Dir for lunch. From Dir we leave the asphalt road and drive on jeep track to ascend of Lowari Pass (3,200 Meters), the gateway of Chitral Valley. From the top of the pass we have fascinating view of the Hindokush mountains stretched towards North in front of us, and Karakoram mountains in the south. The descend of the pass is more interesting than the ascent, as we take 96 hair-pin turns to get to the valley floor. Passing through the dry and rocky landscape we arrive at Chitral town. Overnight stay at motel.
4

Kalash   Morning tour of Chitral town. Stroll down the narrow single lane bazaar in the backdrop of Tirich Mir (7,708 M), the highest summit of Hindukush range. Later drive by soft top 4x4 jeeps from Chitral town to Bomburet village in Kafir Kalash Valleys. The journey takes about an hour and a half. Arrive Kafir Kalash valley the home of “Infidels Wearing of Black Robe” a tribe of some 3,000 people practicing their old religion that is a mix of animism and fire worship.
5

Kalash to Sorlaspur   Morning drive by soft top 4x4 jeeps for exciting drive through the main Chitral valley, following the Mastuj river upstream. As we drive through the dry landscape of Hindu Kush range, we also pass many small villages perched on rock faces. Jeep tracks lead from here to the side valleys and villages. Enjoy fascinating views of Tirich Mir (7,708 M), Buni Zom (6,551 M) and Drassan Peak (6,553 M) as you drive North-east. At Mastuj village we turn south on the jeep track to arrive at the small charming village of Sorlaspur, meals and overnight at Camp at 3,003 meters.
6

Shandur Pass   At 3,734 m above sea level is the highest Polo arena in the world. This wide, flat pass is covered with snow from November to May. In summer it turns into a lovely summer pasture and with two small lakes. People of the area claim that Polo had originated here, “The Game of the Kings is the King of the Games” Every year Polo lovers from Northern Pakistan gather here to choose the Polo Champion of the year. This year the Polo tournament will take place from 7 - 9th of July. At the time of the matches on these three announced dates there are thousands of Northern Pakistanis who camp here to witness the matches. Camp overnight at Sorlaspur.
7

Sorlaspur   Start the Trek From Sorlaspur we start our trek with Chitrali porters carrying the loads. We walk through the mountains along the Laspur river. After three to four hours walk we arrive at the village Nalgar which is the last permanent settlement on this trek. The tiny village is surrounded by Birch & willow trees and fields of wheat and barley. As Hindu Kush mountain range receives very little rain fall and monsoon does not reach this valley so the summer skies are normally clear. This can be a hot day as heat is reflected by the rock faces. After rest at the village we continue in South-west for another three hours walk to the meeting point of Bashkar river with Kachikani river. Overnight Camp at 3,415m.
8

Trek to Khunzazoe   As we start the trek in the morning we take a 90 degree turn to south east and follow the Kachikani river, then crossing the river on a foot bridge to walk on the right side of the river. At lunch time we arrive at a small pasture with some bushes and greenery. As we continue walking, the landscape is typical Hindukush: dry and barren. Walking through the boulders we arrive at our campsite Khunzazoe, meaning “the place of the queen”. In this landscape it is a royal place with greenery and a fresh water stream, surrounded by snowy peaks in all direction, rising from 4,871 to 5,500m. Overnight Camp at 3,750m.
9

Trek over Kachikani Pass   Today we start the trek early to cross the Kachikani Pass before the snow becomes soft and difficult to walk over. At dawn we start the trek with Kachikani glacier visible in west at four hours walk over lateral moraine. As we approach the glacier the first part is covered with small stones, then we move on to snow and the ascend is gradual steep for about an hour. As we approach the wide pass the ascend becomes easier. From the top of the pass at 4,766 meters we have magnificent views of snow covered peaks of Hindukush and forested green slopes of Swat Himalayas. The immediate descend of the pass is steep, narrow and covered with soft snow - requiring careful stepping. After an hour of steep descend the slope becomes easier and relaxing to walk on, with many glaciers flowing in different directions. Camp overnight at Bokhtshal at 3,875 meters, a pleasant summer pasture with birch trees and Himalayan flowers in June and July.
10

Trek to Shonz   A rewarding and romantic walk through the gradually descending valley filled with turquoise blue lakes, occasional water falls and grooves of birch and willow shrubs. We follow the Bokhtshal stream flowing through the valley to the point where it is joined by another stream flowing from the Bashkaro Pass in the north. The meeting place of the two streams called Shonz is also a popular summer settlement for the Gujjar nomads. This tribe visits the summer pastures every summer, with flocks of goats, sheep, donkeys and horses to feed them on the abundant grass of the pasture lands. They stay here in June to move on to higher grazing grounds and in September & October they move from the mountains to get down to the plains of Indus valley to spend their winters. Meals and overnight at Shonz camp at 3,200 meters.
11

Trek to Mahodand lake     An easy down hill trek through the green wooded valley. About an hour after we leave the camp, we cross the stream and approach the left bank on a wide track. Around lunch time we arrive at the summer settlement of Diwanger, with few houses built with stones and wood to provide the shelter for the goats during bad weather. Walking on gradually descending well marked trek we arrive at Mahodand lake, a charming fresh water lake situated in a wide meadow. Around the lake we have Deodar and pine tress, that add to the beauty of the secede. The lake also attracts fishing enthusiasts who come here to try their luck for the famous Trout fish of Swat. Enjoy fascinating views of Falaksair (5,918 m) the highest summit of Swat valley. Mahodand camp at 2,890 meters.
12

Mahodand Lake - Kalam Board   The soft top 4x4 jeeps for short drive through the pine forests of Swat to the popular summer resort station of Kalam. At Kalam the valley opens up as a fertile little plain that was once the basin of an ancient lake. The town is inhabited by Kohistanis from upper Indus river valley and dominant Pathan population. Pathans speak Pushto this is also spoken in southern Afghanistan. Arrive and transfer to hotel to enjoy a hot shower after many camping nights. Lunch at hotel afternoon free for exploring the single lane bazaar and the town. Dinner and night stay at hotel.
13

Kalam - Mingora   An interesting 100 kilometers drive along the Swat river to the twin cities of Mingora and Saidu Sharif that forms the traditional capital of former Kingdom of Swat. We pass interesting small towns on our way, including Madyan and Bahrain that are known all over Pakistan for their needle work handicrafts. The wood work of Swat is also impressive as today we see many displays of this intricate wood work in small towns. At Mingora we visit the Gandhara Buddhist archaeological museum that displays exquisite works on Stone and Stucco sculpture from 1st to 3rd century AD. Later visit the Buddhist Stupa from 2nd century AD at Butkara. Evening free for walking through the narrow old bazaar of Mingora. Meals and overnight stay at hotel.
14

Arrive Islamabad   Air Conditioned transport for drive through the lower Swat valley to Islamabad. As we start the drive from Mingora, we make short stop in Swat valley to visit the Gandhara Buddhist Stupa at Shigardara. Driving through the lush green Swat valley and its orchards, we arrive at the broad Malakand pass that is the normal entry or exit point into Swat valley. Enroute visit the best preserved Buddhist monastery at Takht-I-Bhai, dating bask to 1st century AD. Built on top of a rocky hill surrounded by the fertile green fields of valley of Peshawar, the monastery stand by itself in a peaceful setting. Arrive Islamabad and transfer to hotel night stay and dinner.
15