An exciting overland journey from Islamabad along the Karakoram Highway to the Hunza Valley and the Khunjerab Pass, then over the scenic Shangla Pass to the fertile Swat valley.

The trip ends at Peshawar, the historic gateway to the Indian sub-continent.
As you travel along the Karakoram Highway, which has been called the eighth wonder of the world, there are superb views of many spectacular peaks rising above 7000m, including Nanga Parbat, at 8125m, the highest of the peaks we will see during our journey. We will also stop at a unique site which is the meeting place of the world’s three highest mountain ranges – the Karakoram, Himalayas, and the Hindu Kush – on our way to the Khunjerab Pass. At 4733m this is not only the border point between China and Pakistan but also the place where the Pamir and Karakoram join. The tour ends with visits to Swat and Peshawar and an introduction to the region’s unique Gandhara Buddhist heritage and Pathan culture. 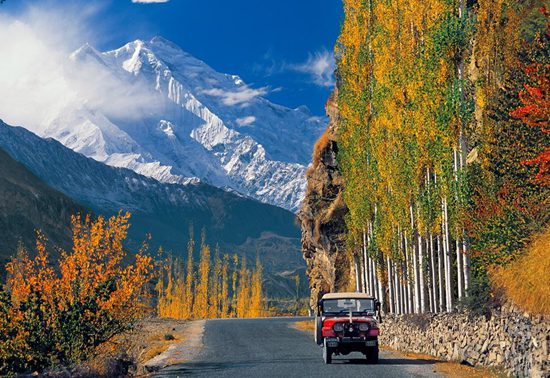 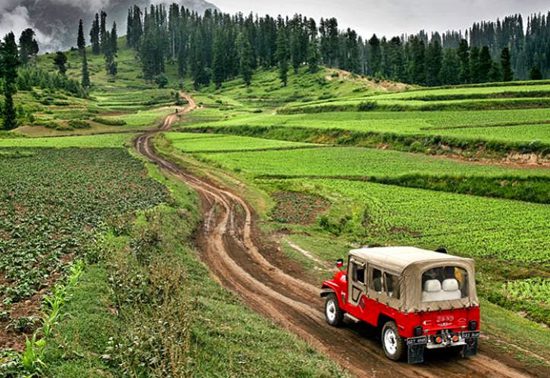 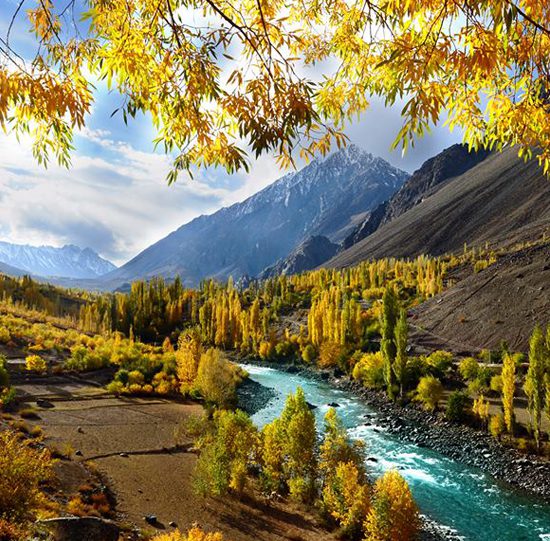 Arrive Islamabad – Besham/ Narran Morning flight to Islamabad where you will be met by Rock Valley Tours. From Islamabad, we will drive 28km to Taxila, the capital of the Buddhist Gandhara civilization. It is regarded as one of the most important archaeological sites on the sub-continent. We will visit the ruins of a former city (Sirkup), a former monastery (Julian) that is built on top of a hill and the splendid site museum that contains artifacts from the sites. Among the museum’s collection are gold and silver coins from the time of Alexander the Great (326 BC). After lunch we drive through the beautiful, lush green valleys of the Mansehra District towards the Karakoram Highway (KKH). The highway took 20 years to construct and was a joint effort between Pakistan and China. During this time 300 Chinese and 600 Pakistanis lost their lives working on the project. After a 4-5 hour drive, we will stop for the night at Besham/ Narran.
2

Besham/ Narran - Gilgit (Meet The Indus) Early morning drive to Gilgit, the capital of Pakistan’s Northern Areas. At Thakot/ Babusar Pass, we cross a Chinese-made bridge and enter the Indus River gorge. For centuries this branch of the Silk Route was used by traders and Buddhist missionaries and there are many rock carvings in the area dating back to these times, including the carvings at Shatial. After lunch in Chilas, we stop at Thalichi, the best viewpoint for Nanga Parbat (8125m), which is also known as the Killer Mountain and is the 9th highest peak in the world and the second-highest in Pakistan after K2. Rakaposhi (7788m) and the Haramosh range can also be viewed from here. Further north we stop at the point where the world’s three highest mountain ranges - Karakoram, Himalayas, and Hindukush – meet; this is also the point where the Gilgit River joins the mighty Indus. We follow the Gilgit River to Gilgit and our hotel for the night.
3

Gilgit - Hunza (Karimabad) After crossing a suspension bridge over the river we reach Kargah to visit the Buddha carved into the rocks during the 7th century AD. In ancient times the Kargah Valley was used by Buddhist monks on their way to Taxila. We drive on to the breathtaking Hunza Valley again following the old Silk Route used by Buddhist monks and traders. There will be a short stop at the Rakaposhi (7788m) viewpoint. Overnight at Hunza View Hotel in Karimabad.
4

Hunza Karimabad (Full-day excursion) A free day in Karimabad for short walks to the Altit and Baltit forts, and other parts of the valley which is ringed with majestic peaks - Rakaposhi 7788m, Diran 7266m, Ultar 7400m, Golden 7027m peak. There are also glimpses of the beautiful Nagar Valley on the other side of the river. The friendly long-lived people of Hunza are mostly self-sufficient, growing wheat, maize, apricots, and walnuts, making their own clothes, shoes, along with wooden and stone bowls. An afternoon walk could take you to the Ultar Glacier, via the village irrigation channel, or you could stroll through the single-lane bazaar for better views of the soaring peaks around you. Overnight at Hunza View Hotel.
5

Karimabad - Passu (Gojal Upper Gojal) We travel further north into the Gojal Valley to Passu. About 70 years ago Passu used to be the second-largest settlement in Hunza after Karimabad. However, the glacier upstream on the Hunza River advanced and created a dam across the river, that later broke, washing away houses and fertile fields. Now the river occupies most of the valley floor. We will take a morning walk to the Passu Glacier and Passu Lake (45 minutes one-way). From the snout of the glacier, there are stunning views of Shispar (7611 m) and Passu Peak (7478 m). After lunch at our lodge, we will visit the (800ft) suspension bridges of Passu that are still used by the local people. Overnight at lodge.
6

Passu – Khunjerab Pass (Full-day excursion to Khunjerab Pass) Drive overland to the highest border crossing in the world at 4733m – the Khunjerab Pass between Pakistan and China. The pass also marks the end of the Karakoram mountain range and the beginning of the Pamir Range. We stop first at Sust, the last check post in Pakistan for customs and immigration formalities, then continue along the Karakoram Highway beside the Khunjerab River. At Dhee is the start of the Khunjerab National Park where sometimes one can see ibex, Marco Polo sheep, and snow leopards. After a short stay at the pass, we’ll drive back to Passu. Overnight at Lodge.
7

Passu - Besham Today we drive back down the Hunza River valley on the Karakoram Highway, enjoying new views of the amazing array of mountain peaks. Overnight at Besham on the banks of the Indus River.
8

08 Besham - Mingora Swat We leave the KKH at Besham to drive towards Swat, through the Shangla Pass. The valley of Swat (3250ft above sea level and surrounded by the mighty Hindu Kush and Karakoram ranges), is a land rich with fruit-laden orchards, flower-filled slopes, meandering rivers, and tumbling streams. The towns of Saidu Sharif and Mingora form the twin capital of the area. Overnight in a Mingora hotel.
9

Swat Mingora (Excursion to Upper Swat Valley) After breakfast, we head for Kalam 2000m above sea level in the Upper Swat Valley, with a visit en route to Bahrain, a town beside the Swat River where trout fishing is a favorite pastime. Drive back to Mingora to stay overnight.
10

Swat - Peshawar It is about a three-hour drive from Swat to Peshawar, and when we reach the city we will have lunch and freshen up at our hotel. In the afternoon we will take a city tour. Peshawar has played a vital role in the history of the sub-continent because of its location near the Khyber Pass and the Gandhara civilizations on the Indus River plains. The city is now known more for its unique frontier town atmosphere. There will be time to visit the street of the storytellers (Kissa Khawani bazaar), the street of gold (Kasera bazaar), Karavan Serai, and the Mahabat Khan Mosque. The museum of Peshawar, known for its collection of Gandhara artifacts, is also well worth a visit. Dinner & overnight at Shelton House.
11

Peshawar (Khyber Pass half-day excursion) Morning excursion to the Khyber Pass after obtaining permission from the tribal authorities. The Khyber Pass is one of the most important historic and strategic land routes into the Indian sub-continent. Many invaders, including Alexander the Great, have used this route on their way to explore the wonders of the fertile lands that lay to the east. We may be allowed to go up to Michni Post from where there is a panoramic view of the Pak-Afghan border and the Jalalabad province of Afghanistan beyond. Lunch at Peshawar. (45km one way)
12

Peshawar - Islamabad We travel along the Grand Trunk Road which was first constructed by the Pathan Emperor of the United Indian Empire, Sher Shah Suri. There is a chance to stop where the road crosses the Indus River at Attock to take a photograph of the meeting point of the Indus and Kabul rivers. We reach Islamabad in the evening.
13