K2 THE ULTIMATE ADVENTURE (8611m): The Karakoram in the Turkish language means “Black Rubble”. In 1856 A.D. Capt. Montgomerie surveyed a number of peaks in the Baltoro area of the Karakoram from a distance of about 200km. He explored a cluster of high peaks and named them K1, K2, K3 and soon with the prefix “K” for the Karakoram. In 1861 A.D. the area was further surveyed by Col. Godwin Austin and recommended K2 as the highest and measured it to be 8619m only three meters more than its official height (1988) of 8616m. Its local name is Chogori, which means the “Great Mountain”.

Thus, K2, the second-highest mountain in the world stands majestically above the combination with the sweeping Godwin Austin Glacier offering an ice highway towards its surface. It was first climbed by Italians. The route to K2 goes through the Baltoro region of Baltistan. There are several high peaks, which are persisted, in the world’s largest temperate zone glacier. Only the highest or more prominent ones have been named or climbed. A wonderful nineteen of these peaks stand over 7600m while four of them are 8000meters.

Towering north from Concordia, the joining of five glaciers named in 1892 by Martin Conway after the place de la Concorde in Paris. Some of the world’s longest glaciers after polar region Abruzzi, Godwin Austin, Biarchidi, Virginia, West Gashbrum and Broad glaciers meet here at Concordia.

The worst year was 1986 when five expeditions were on K2 in early August, 16 climbers reached the summit, but 13 died. The memorials of those climbers are about 20 minutes north of K2 base camp, on the rock face above the junction of the Savoia and Godwin Austin Glaciers. The first memorial was placed in 1953 of the famous American climber Art Gilkey. The process of success and defeat is still on.

For more information on K2 The Ultimate Adventure (8611m) and the Expeditions that we run there, contact us via:

DETAILS OF SERVICES INCLUDE:

1. Accommodation: In good standard hotels on a full board/half twin basis in cities. During camping in international quality dome tents on twin sharing basis, with full board services.

2. Transportation: Air Conditioned transport in Islamabad and up to Skardu. 4×4 soft-top jeeps till trek head for members and equipment.

3. Meals: All meals in cities and during trekking and at the base camp.

4. Equipment: All camping & kitchen equipment will be provided during trekking and at the base camp.

5. Custom clearance: In Islamabad, we shall take care of the customs clearance procedure of equipment and we will store the equipment in our store till the arrival of the climbing team. The clearance fee is not included.

6. Briefing & De-briefing: We will assist you in briefing & de-briefing with the ministry of tourism and coordinate the matters with Government appointed Liaison officer.

8. Supporting Staff: Qualified mountain guide, cook, cook helper will stay at the base camp with the group throughout the expedition to make sure the smooth conduct of the expedition.
Guarantee, for Helicopter rescue and pollution fee. (Fee not included)
Insurance, of porters, staff, Liaison officer.
Tips & portage & entrance fee at sites, hotels and at the airport.

COST DOES NOT INCLUDE: 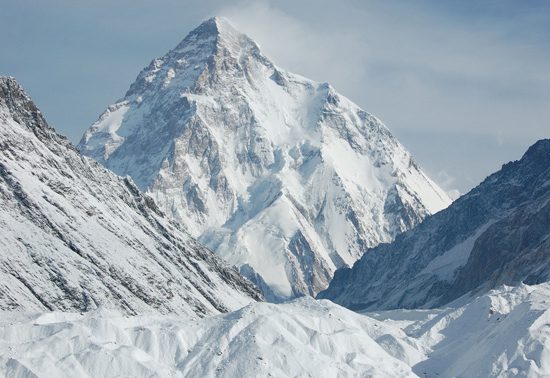 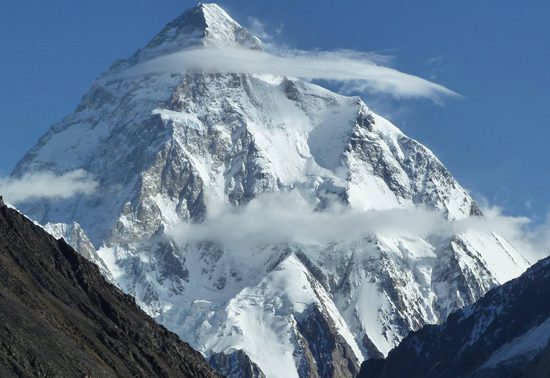 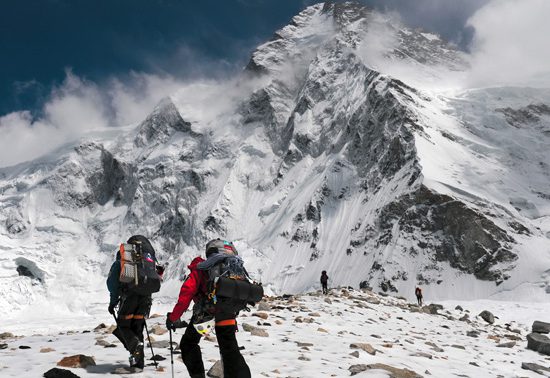 Chilas / Skardu Day free at Skardu. If your are driving, complete road journey (07–08 hrs) to Skardu (275 km). En-route has good view of Nanga Parbat (8125m) at the confluence of Indus River and the rapids and fall of Indus River. Overnight at hotel.
5

Askole (3000m) By jeeps drive to Askole (8-9 hrs). The last village of about 50 houses. The villagers grow their own cereals, vegetable and fruit and own large herds of sheep's, goats, yaks and dzos. Overnight in tents.
7

Jhola (3200m) Start 2-3 hours, walk across wasteland and traverse Biafo Glacier, a to tiny Ocean of moving boulders and crevasses 2 km wide. Cross the glacier and after a lunch break continue to Jhola (4-5 hrs). Cross-Dumardo River Bridge and camp at rather dusty campsite encompassed by a few bushes with a side stream. Overnight in tent.
8

Paiyu (3600m) Start on a moderately easy trail for 3-4 hrs. Crossing Bardumal campsites along a 2-km stretch of sandy River beach. After a lunch break continue towards Paiyu for another 2-3 hrs. trail climbs to a Vantage Point providing view of the Snout of Baltoro. And in the far distance a marvelous panorama of Cathedral Towers and triangle of K2 to the left for the first time. Paiyu is a herded campsite. Overnight in tent.
9

Khuburtze (4000m) Start for a 5-8 hrs. slight climb up Baltoro Glacier on the southern edge. After about two hours the path divides at the snout of Baltoro glacier where the left side goes to the BC of Tango Tower and the Sarpo Lgo pass. Continue to the side right climbing up on to the glacier that stretches up the valley 62 km long and 2 km wide. Follow the southern edge to Liliwa and onward to Khuburtze lovely walks for about 90 minutes to the campsite and with clear water. Overnight at campsite.
11

Urdukas (4200m) 4-5 hours lovely walk mostly along the crest of lateral moraine with stunning views of Paiyu Peak, Chorichi, Uli Biaho, Tango Towers and so on. Urdukas is a viewable campsite. However, like Paiyu this site is over used and polluted. Overnight at campsite.
12

Goro II (4500m) 6-8 hours walk on the glacier. The first hour walk is across difficult side Crevasses, however the way is smoother and easy in the center. Continue for 2-3 hours to Goro-I opposite of Yermanendo Glacier falling down from the Mashebrum pass. For the next 3-4 hrs continue east up the Baltoro glacier. Following telephone wire from army HQ Goro to Gasherbrum IV. Goro-II campsite is pitched on the rough stones and ice in the hub of the glacier with water from the glacier melt. Overnight at tent.
13

Concordia (4700m) / K2 Base Camp (5100m) 6-8 hours slightly easy walk, with spectacular views and titanic mountain panorama, including Muztagh Tower, Gasherbrum IV, Mitre Peak and the mighty K-2. Camp at Concordia named by Martin Conway after the place De La Concordia in Paris. Lunch at Concordia. You will be meeting some crevasses near Godwin Austin glacier. Overnight at tent.
14

Gondogoro La (5680m) / Khuspang (4680m) 4-5 hours. Start very early in the morning for the uneasy and steep ascend to Gondogora_La (high pass), and another 3-4 hrs descend to the high camp (Khuspang) on the other side. Also BC for Gondogoro Peak. Continue trek to Dalzampa: (4300m) another 4-5 hours easy descends glacier Moraine to exotic campsite of Dalzampa "field of flower". A climb to the lateral Moraine provides fantastic views of glacier and jagged spires. Overnight in tent.
17

Shaieshcho (3600m) Hushe: (3300m) 4-5 hours walk on the lateral moraine through wild roses, gooseberry cedar and Tamarisk bushes. The Charksa valley joins the Gondogoro at Shaieshcho and the route leads towards the base camp of K6 and K7. Another 4-5 hours the last day of the trek follow the east bank of Hushe River on an easy path through the field and camp outside the village.
18

Skardu (2340m) By jeep drive to Skardu via Khaplu. The second largest kingdom in the old Baltistan safe guarding the trade route to Ladakh along Shyok River. Overnight at hotel.
19

Islamabad a) Leisure day at Islamabad b) In case of driving, complete road journey from Chilas to Islamabad. Overnight at hotel.
21

Departure Fly out Transfer to airport for your return flight home.